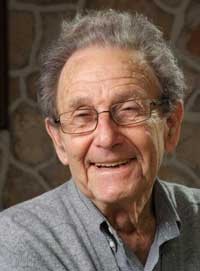 Come hear Murray Greenfield talk about his experience sailing a ship as part of the “illegal immigration” of Holocaust survivors into British Mandated Palestine.

Murray Greenfield was born, raised, and educated in New York City. During World War II, he served in the merchant marines, and by late 1946 at the age of 20, he heard about the ‘Aliyah Bet’ - or “illegal immigration” - as the British termed the rescue of Jews who survived the Holocaust. Greenfield was one of 240 American volunteers who sailed on “rust buckets” and ultimately helped rescue and relocate 40% of Holocaust survivors to Palestine. After spending time in a British prison on the isle of Cyprus with his entire shipload of refugees, Greenfield eventually moved to Palestine. It is said that these ships launched a state as the British could not accept the embarrassment they received from these survivors who were impassioned and empowered after their internment.