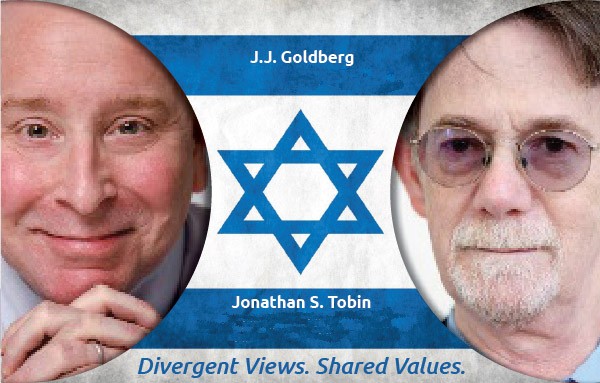 Left Vs. Right: The Battle for Israel’s Soul

Is the conflict between Israel and the Palestinians a tragic dispute over land, part of a global battle against Islamist terror, or both?

Two well-known Jewish journalists — one on the political right, the other on the left — will debate that question and others about the future of Israel, for the JCRC Fall Lecture as part of our Israel @ 70 festivities on Sunday, October 15.

It is universally accepted that if you get two Jews in the same room, you’re going to hear three opinions. At the same time, though, the Talmud records numerous disagreements between the sages Shammai and Hillel, describing them as disagreements for the sake of heaven. Jews with dramatically different points of view have some core disagreements. That can make for a lot of heat. But thankfully, it can also make for a lot of generative, rewarding conversations.

Unfortunately, these recent years, we often find the topic of Israel has become one of the most contentious discussions happening in American Jewish communities. To come together as a Jewish community, particularly around Israel, we have to be able to talk about it—even the most challenging questions and issues that divide the Jewish community about Israel.

On Sunday, Oct. 15, the polarizing topic of Israel and U.S. relations will move from newsprint to podium when two well-known journalists debate the current internal and external challenges facing the State of Israel.

From the left, the event will feature J.J. Goldberg, editor-at-large of Forward and former U.S. bureau chief of The Jerusalem Report.

From the right will be Jonathan S. Tobin, award-winning opinion editor of the Jewish News Service.

This unique event offers the opportunity to hear two internationally respected journalists from opposite sides of the political spectrum carry out a frank discussion on the Jewish homeland.  They will demonstrate how you can express diverse opinions in a civil and constructive manner, while identifying areas where there is common ground. These gentleman may reinforce your beliefs or open up a whole new perspective for you, regardless of where you fall – left or right.

The program will take place on Sunday, October 15, 7:00 pm in the Sam Lerner Center for Cultural Arts in Shalom Park. The event is free and open the public but RSVPs are requested. CharlotteJCRC@jewishcharlotte.org. A dessert reception will follow the program.